Start a Wiki
Freakazoid is the main character of the show. He is voiced by Paul Rugg.

Freakazoid was born on Christmas Day when Dexter Douglas entered a computer code by accident, activating a flaw in his brand new Pinnacle computer chip. He was suddenly zapped in the computer, where he absorbed the knowledge of the Internet and gained superpowers. His initial transformations were unstable and unpredictable, but Dexter soon learned that he could change into Freakazoid by saying "Freak out," and back to Dexter by saying "Freak in."

Superhuman Strength: Freakazoid has a varying degree of superhuman strength, sometimes only slightly stronger than normal people, while at other times stronger than Cave Guy.

Cartoon Physics: Freakazoid can impart the laws of physics in absurd ways to a level that even rivals those of Animaniacs.

Behind the Scenes Edit

Freakazoid was designed by Bruce Timm. Mike Allred, creator of the comic Madman, has claimed that Timm told him Madman was an influence on the design of Freakazoid.[1] When Timm left the project, Tom Ruegger was brought in to develop the character and came up with the madcap personality. Paul Rugg started as a story editor and writer on the show, but also became the voice when all of the auditioning voice actors were trying to be too manic and do a Robin Williams-type shtick. The producers were unable to give the auditionees any feedback, since they had no idea what voice they wanted; they simply knew that they did not want the version of the character they were hearing in auditions. Finally, in hearing Rugg give readings to the auditionees, Ruegger realized that he should do the voice. Rugg auditioned for the role by reading the episode "Dance of Doom" and improvising extensively between the scripted lines. The tape from that audition became the final audio for the episode.[2]

Pinky and the Brain Edit 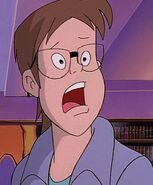 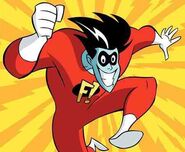 Add a photo to this gallery

Retrieved from "https://freakapedia.fandom.com/wiki/Freakazoid_(Character)?oldid=7990"
Community content is available under CC-BY-SA unless otherwise noted.