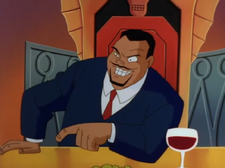 Dr. Mystico (voiced by Tim Curry) is a mad scientist who genetically combines humans and orangutans. He seeks to take over the world, which he frequently confuses with Cleveland. He has been called "mad," "insane," and "Wendell." After being barred from the universities, Mystico was forced to retreat to a private island. He uses a mirror to blind passing aircraft, causing them to crash and provide him with new test subjects, whom he imprisons in molecular bamboo cages.

His cat Sparkle is his closest companion. He has three orangumanservants: Fatima, Akbar and Ringo.

Community content is available under CC-BY-SA unless otherwise noted.
Advertisement